The Black Swans at Dawlish 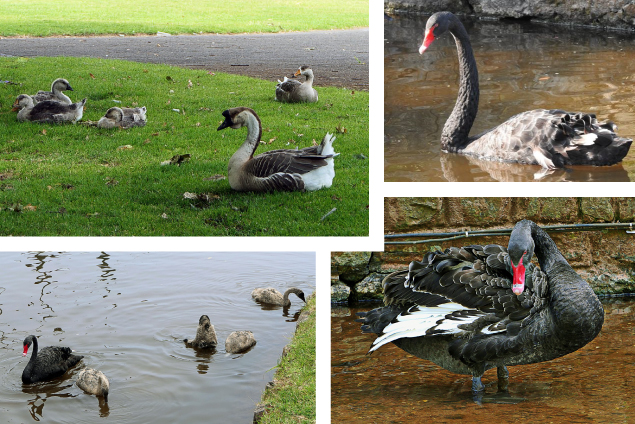 The Black Swans of Dawlish are the unofficial emblem of our Devon town.

If you have been into Dawlish town you may have seen our unofficial emblem, the Black Swan, paddling up and down the brook that runs through the centre of the town.

For over 100 years we have been lucky enough to have them living with us and growing their family on The Brook that runs down to the seashore.

The Black Swan is originally native to the West Coast of Australia and first recorded in the 17th Century. At the start of the 1900’s, a local Dawlish man emigrated to New Zealand but kept in touch with his family and friends in Dawlish but came back to visit a number of times.

On one of his visits in 1906 he bought with him the Black Swans as a gift to the town. Many people think that he wanted to give Dawlish something that would make it unique from other seaside towns and back in the early 1900’s a Black Swan certainly did that!

During the two World Wars, the Black Swans sadly died out and the reason for this we don’t really know. However, after the war, Captain Pitman, a game warden in Uganda, presented the town of Dawlish with a pair of Black Swans in memory of his parents as his father had been a County Councillor and loved the town. The Black Swans have lived here ever since and have long been the emblem of the town.

Generally, swans are fairly unusual in the bird kingdom as they are one of the few species that are monogamous and tend to pair for life. Our Black Swans, however, don’t always abide by that rule and are different to other breeds of swans. The female swan is more likely to have a number of partners that produce multiple clutches of eggs each year. Unlike most other breeds of swan, the male Black Swan not only helps with the building of the nest but also spends more time sitting on them than the female.

Ever since the swans have been reintroduced, they have become a tourist attraction in the town and we are lucky enough once again this year to be able to see more cygnets have joined the bevy.

Next time you are here, why not visit the town and have a look in The Brook and you will hopefully see these majestic birds sitting on their nests in the middle of the stream or elegantly paddling around in the water!

Thinking of staying? Call us

For all your festive family fun in Devon – the countdown to Christmas starts here! If you are coming to […]

Christmas and New Year at Welcome!

The countdown is finally on and with just 3 weeks to go before we open for our 2021 season, we’re […]